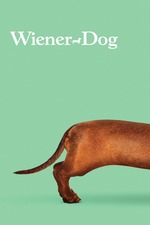 Alright. This was a pretty wild movie. Way better than I expected, like way way better than I expected. I think this may be a greatest hits of Todd Solondz films, like, everything I love about his movies is here and it can definitely hold a torch to his other stuff. Its also easily his most nihilistic and aggressive film. It’s a rough strategy to make your newest film about a dog, but damn, that dog was cute though. It’s not a hard assumption to make that this was Solondz’ attempt at Au Hasar Balthazar, and he doesn’t even hide it because of these musical choices. This could either be a cheap trick or a pretty great meta joke, I think it’s the latter. I mean, damn, it’s a bold move to allude to and self-awarely reference such a cinematic feat. I think this has the best cast of any Todd Solondz film, which has hard competition with Happiness, Storytelling, Life During Wartime, and Dark Horse, but between Danny DeVito, Tracy Letts, Greta Gerwig, Zosia Mamet, Ellen Burstyn, and Julie Delpy, this is pretty iron clad as an acting ensemble. Speaking of, yo, what the fuck, Tracy Letts and Julie Delpy as a married couple is fucking hilarious. For real, this is the funniest these two actors have ever been. Greta Gerwig nails the Dawn Wiener impression. She’s just as heartbreaking but creepy as Heather Matarazzo’s iconic performance. The idea that she is alive in this movie, which retcons Palindromes, is hysterical, and for about 20 minutes, I think Solondz creates an excellent sequel to Welcome to the Dollhouse, more fulfilling than Life During Wartime. Danny DeVito steals the movie, and for real, dude could take a serious acting turn if he cared about awards. He’s portraying Todd Solondz’s surrogate character, and he’s pretty believable. Also I think he gets lucky, because I could’ve watched a full 90 minutes of this storyline - I mean, damn, what an awesome snapshot of Solondz’s thoughts on being a film director. It’s pretty heartbreaking and sincere. Well, he steals the movie until the Ellen Burstyn ploy, which proves her acting chops in case anyone forgot. It’s a pretty brutal final storyline for this movie. You’ve got to love how much Solondz style hasn’t changed since Happiness. It’s like he just gets better equipment, but twenty years later his tone, style and humor are all untouched, which is great for such a unique talent. The intermission is the funniest joke Solondz has ever pulled off. This movie also has a pretty angry and loaded shot at film students, which was fantastic, but probably made things awkward with the kids at NYU. The talk back scene is the summary of my time in film school, as brutal as it is, it’s pretty funny and hard to watch for film school students.

Shit, this is the kaleidoscopic Solondz film I’ve needed for a while. No story overstays it’s welcome, every one is exciting and hilarious, it’s got some of his best jokes, and a few of his most controversial statements, it’s just aimed at the art community this time around. I’m really hoping this isn’t his last film, because it feels like it is, but I hope it’s him building up steam, because with this energy and talent on display, it’s hard to not want him to keep improving and making better films. But nonetheless, this is a top 3 film for him, I think it’s one of his strongest, and I definitely need to see it again soon.