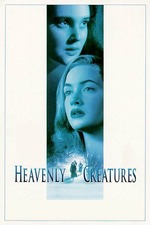 This was like a random video store pick. I was browsing titles on Netflix and came across this film by Peter Jackson that I'd never heard of before. So, like in any video store hunt I've gone on in the past where I discover something by a really cool director that I've never heard of - I had to watch it.

I'm used to Peter Jackson's fantastical fantasy worlds, and indeed I do love the way he puts them together. Each with their own moods, and personalities. Essentially, they play an extra character in his films. Each world is totally unique. I can safely say that I've never seen a fantasy world quite like this one before.

The film takes us through the relationship of two young teenagers who by chance meet because they both suffered weird illnesses that prevent them from participating in gym class. One is moody and hates everything. The other is vivacious and imaginative. The totally crazy part about it all, is that it actually happened. And holy crap.

The more intense their relationship becomes, the more lifelike their "Fourth World" appears. The more the viewer accepts that this is a real place that these real people journey to. For real. Peter Jackson does an excellent job of bridging the gap between fantasy and reality - as I feel most teenagers can still do. When you're a child, it's so easy to make-believe. When you're Peter Jackson, it's still easy to make-believe, but it's more fun because through the magic of film it all appears in front of you.

This is all the information I think anyone really needs before venturing into the world of Heavenly Creatures. If I went in expecting the ending, it would have been a totally different film. A huge part of enjoying Peter Jackson's films, for me, is just letting the fantasy worlds grow larger and larger to tell the story - and allowing myself to believe.

Watch this film if you enjoy imagining things. Don't watch it if you only like films that tell a direct, linear story about boring subjects that have been told over and over and over again.