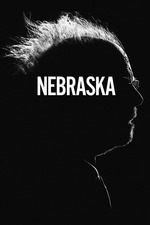 Everything about this movie makes me feel so warm and tingly. On a journey through ye olde U. S. of A., a father and son visit old family (really old), see old friends and get up to no good - through no fault of their own.

Woody (dad, Bruce Dern) and David (son, Will Forte) take a trip from Billings, Montana across to Lincoln, Nebraska to claim "a million dollars" from a bogus magazine ad. One night at a motel, Woody becomes inebriated, hits his head and they have to go to the hospital. The pair become waylaid in Woody's hometown, where everyone is pleased to learn that Woody has won a million dollars.

Sometimes feel-good movies are just sort of saccharine and dull. They make you smile, but they don't really encourage you to laugh out loud. Nebraska breaks all of those rules. There are not a lot of sweet characters (except for maybe David). The film doesn't try to sweep you up in some sort of false sense of security, i.e. "everything is going to be ok". In fact, the film in and of itself is based on insecurity.

And let's not forget how ridiculously funny this movie is. From the sharp tongued Kate (mom, June Squibb) and the asinine cousins, to the slow delivery of inane conversation by all the old people, I found myself chuckling every 5-10 minutes. Legitimate chuckles, not "ohhhh that's niiiiiceeeeee..." which I sometimes fall prey to.

As the film drew to a very satisfactory close, I had tears in my eyes. Alexander Payne did such a great job of allowing Woody to just be Woody throughout. My wonderful boyfriend Justin, noted that he didn't need to have some sort of big revelation to create that satisfaction - instead it was left to a small victory that delivered that classic "feel good" feeling.