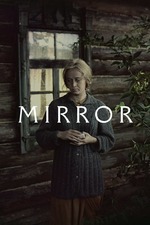 Having not seen any Tarkovskys, an artist consistently leading the conversation of cinema’s greatest, I thought it was high time that changed, so decided to watch what i’d heard is one of his milder ventures. Let’s just say, if this is mild, i’m not sure I can handle what lays in store for me with his other pieces.

Watching a film like Mirror raises doubt over the star ratings system. Some confusing films encourage research and investment of thought - Tarkovsky’s most personal, unassailable film leaves you scratching your head wondering where to actually start, to the point that I feel unqualified to criticise it, and certainly unable to appraise it a star-shaped value.

I know it exceeds most, from the artistic value to the filmmaking aptitude to the rich tapestry of life, yet, and not to sound like a philistine, I found it frustrating and difficult to experience. At times, for lack of a better word, boring. It’s spiritual and existential, a haunting pastiche of dreams, history and the personal constitution of an artist, with poetic interludes, supernatural sidetracks, and nuanced, piecemeal characters, but it felt impossible to get my arms round, too much time spent fidgeting, irritable, trying to figure out what was going, and I struggled to just, feel it.

His cinematic language is currently gibberish, but by the similar token of how I don’t understand Mandarin but appreciate how meticulous and brilliantly patterned it is. It’s a vocabulary that transcends any standard conversation, open to considerable interoperation, one that’s lingered in my mind, left me with words, images and thoughts that I don’t fully grasp, but the question is to whether grasping is the point, or is it just to feel? There are many films I’ve ‘enjoyed’ more or would potentially rate higher, although, on a thematic, craft and expressionistic level, know they are lesser than this, hence my difficulty with bestowing a rating.

At times very beautiful, often confusing or tedious, but always engaging. For a film I didn’t necessarily ‘like’, it sure has given me a lot to write about, while it feels drasically reductive to mitigate it into words, yet here I am - wording away. Beguiling art, one that I think if you don’t rate it, it’s not because the film is bad, it’s because it didn’t connect or translate to you. Tarkovsky doesn’t care if you understand or if it’s translated to the realm of universal, it’s not for you - it’s for him. Yet, it’s for everyone. Yes - i’m confused by that too.

His genius is plain to see, but one beyond my understanding, intimidatingly so. Personal expression in moving pictures, transcending labels as we rummage through the conscience of a filmmaker. There is obviously subjectivity in film, in all opinions on all things, but Mirror eclipses opinion. Mirror’s in a field of it’s own making, doing exactly what it wants, exactly how it wants, I just don’t think i’m wearing the right shoes to walk the path Tarkovsky’s carved yet