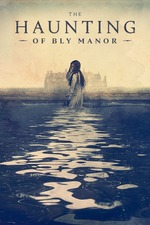 Well. That was depressing! But remarkable. I knew Bly Manor wouldn’t meet the expectations that Hill House had left for it but it didn’t do a bad job, did it?

It’s safe to say, as I’m sure everyone has figured out by now, The Haunting of Bly Manor isn’t a horror story. But a love story. A love story that will definitely teach everyone a thing or two about loss and sacrifices.

Victoria Pedretti returns again to the haunting world. I liked this character the moment I met her and because of that I was left devastated by the end. Oliver Jackson-Cohen also returns but he’s playing a very different character this time. He plays a real John Reid typed character in Rocketman. But we know there’s a reason for his behaviour. My favourite characters were Owen and Hannah. They really bounced off each other and I loved every moment they were on screen. As for the children, Flora and Miles, well I wasn’t as attached to the children in Hill house, I did eventually find myself warming to these characters.

So yes. Bly Manor is a love story. We don’t really find that out until the final few episodes but once we did it then became clear on what the show was trying to accomplish. The final episode...well I didn’t cry but I was very bloody close to. It didn’t really end well for Danielle and Jamie, did it? Midway through the final scene....well I was hoping and praying that Danielle would walk through the door in ghost form but i sort of knew that wasn’t going to happen. Then the credits came up and my heartbreak began. Like Stranger things 3, Toy story 3 and the first 10 minutes of UP, this will take me a while to get over. But let’s not talk much more about the doom and gloom. Let’s go on about the positives, shall we?

I really liked episode 8. At first I thought it was a pointless detour but I found myself really enjoying what I was watching. Some horrors just he ghosts in manors and then not go on tell us why they’re there. But no Bly Manor. It ventures into the heartbreak and loss. That peaceful narrators voice of older Jamie played a part towards my love for this episode.

I also liked how everything tied together. Like when we first saw Hannah and she was looking down the well. I loved how they went back and told us why she was doing that. Everything tied up.

Overall, The Haunting of Bly Manor was a success. It had a lot to live up to and I think it mostly lived up to it. A 3rd season in the haunting anthology? Well only time will tell. But the only thing I will be doing is waking and walking. Waking and walking....get it? Okay I’ll stop. But if there is a 3rd season it will be perfectly splendid. Okay I’ll go. Cheerio!