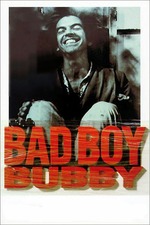 WOW! Just, WOW!
Having never seen this film before, but hearing it spoken of many times over the past 25 years, I had some very strange expectations of this grubby, grimy, horrible, pointlessly disgusting exploitation film.

What I got was a poignant display of the effects of abuse, a strange insight into the mind of a child, their abilities to see the world not as it is, but how they want to see it. Innocent and good.
There was a sullen yet beautiful display of humanities ability to understand each-other in abstract ways.
The bleak, somewhat confronting cinematography juxtaposed against Bubbys innocence, and trust in all those around him.

the way the use of harsh, unabashed characters, who broke Bubby down to the basest levels of humanity, actually paved the way for his ascension to his place in the world, a place of pure understanding and love.

The sweeping soundscapes, the dialogue, the affecting speeches about the very essence of the human condition and it's need for 'meaning'... just, everything about this film is pretty much a perfect example of what cinema should be!

Also, I couldn't help but relate to his love of Pizza!