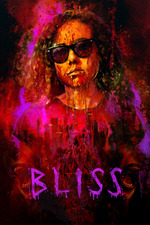 I was a little underwhelmed with a lot of the films I saw at Monsterfest 2019. this title was one that I missed due to a timetable clash.
Watching in now I'm shattered I didn't see this on the big screen!

The pace this films sets is unforgiving. It is a relentless assault on the viewer, very rarely slowing enough for you to really take in what you have just watched. This sounds horrible, but it really works in this films favour.
This is perfectly balanced out by the almost frustratingly slow build up to the painting.

The sheer amount of drugs being taken make the blur between reality and the trip really intense.
The score and sound tracking is just phenomenal. it's freshly 'edgy' with grunge, punk and metal infused with a smidge of psychedelia.

The acting is great, the characters are believable with a wide range of personalities that both gel, and rub against each other in equal measure. these relationships are strained, and it shows.

All in all this was just a fantastic film that was so incredibly unexpected.