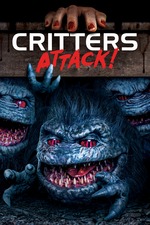 As long as you go into this feature realising its a reboot of a film series started in 1986, then you should find plenty to enjoy!

It has ridiculous (and thankfully mostly practical) effects!
It has scenes where entire buildings of people are unable to escape the ravenous critters and their insatiable lust for flesh, and yet somehow the leads are able to run around hopping skipping and jumping with relative safety.
It has over the top kills (on some satisfyingly annoying characters)
Self sacrifice.
Self discovery!
It is just a great and fairly faithful reboot to an 80s franchise!

There is a few scenes where 'modern sensibilities' stifle the movie a little, but these are largely forgivable and don't stop you enjoying it for what it is. a modern take on 80's CHEESE!

I found it pretty neat that Dee Wallace got a pretty predominant "Cameo" though too those new to the franchise her inclusion would have seemed really bizarre as her character in this doesn't serve a particularly great purpose.