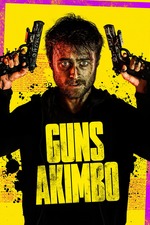 FUCK, YES!
Balls to the Wall CRAZY!!
We start with a short build up of who Miles is and why we should (or maybe even shouldn't) care about what's about to happen to him.

Then when it does, it's just non stop, over the top blood soaked action.
Not the bad type of action either, that takes itself too seriously, this is HILARIOUS from beginning to end.
From the interactions between Miles and, well, anyone he meets. Trying to hide the fact he has fricken guns bolted to his hands, to Nix and her larger than life "I don't give a single fucking FUCK" attitude.

It suffers a LITTLE from the standard "Nix is a crack shot until it actually counts" conundrum that most of these sorts of things do. but then, it would be a much shorter and less enjoyable film if it didn't. so, lets take the bad with the good on this one.
Also, a couple of the main characters had 'grills' or metal fangs in, which can make a few lines muffled or hard to hear/understand.

Pleasantly surprised that they managed to work in a romantic angle, without it being the sole focus, or even really having too much overall effect on the plot at all.

Acting is superb, as can be expected of a cast such as this. I have said it before and will say it again, Samara Weaving is a force to be reckoned with and definitely and actress to keep your eye on!

The sound track is phenomenal! it meshes so well with whats going on on screen. it's a total breath of fresh air in amongst the hip-hop riddled soundtracks of the last 10 or so years.
And while it goes without saying, I'm going to say it anyway. This, was, visually, AMAZING! the whole thing is just stunning to look at. the wardrobe, the colours, the style, the camera work! all of it is just gorgeous!

do yourself a favour, and just go watch this damned film!
It's an absolute RIOT!