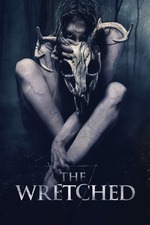 Watched as part of Monsterfest: 2019
Gotta say, while it was a good film, I was a LITTLE disappointed.
It starts out with this great, unsettling and creepy scene. then, introduces you to an amazing creature in the woods witch.

But then it throws that all out and settles into a more 'teen drama' with a bit of a supernatural vibe.
The unnecessary high school style drama between the lead and the 'town bully' are almost entirely able to be discarded without effecting the story in any real way.
The love interest angle was expected, but was clearly just a device to drive the movie in the later scenes.
Speaking of the lead, his character was perplexing, his whole persona flip flopped around from caring, to paranoid, to angry, to sheer asshole, and back again.... it was difficult to connect with him as he didn't really have any personality.

All that aside, the supernatural elements that are present are quite interesting and I would have really liked to see them trim the unwanted nonsense and flesh this out a bit more for a truly creepy and sinister film.