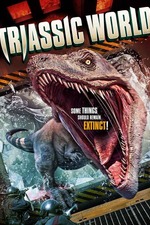 Much like Jurassic park, Triassic World does not feature dinosaurs from the Triassic time period, but Cretaceous period.
Nor does this effect "The World" in fact, the entire film takes place within a single facility.
I'm trying to find a redeeming quality to this film... but it's hard.
A medical company has cloned dinosaurs to harvest organs for human transplant.... (Erm, what!?)
But instead, they somehow instead just give the dinosaurs above average human intelligence and problem solving skills (Erm, what what!?)

Once these dinosaurs escape, a 'fail safe' is in place that will lock down after only a few hours and flood the entire facility with a deadly toxin killing everyone and everything inside.... seems reasonable.

Oh, did I mention that the dinosaurs have a toxic attack that slowly renders the victim amnesiac and paranoid!?!? because, WHY WOULDN'T THEY!?!?

So this film is about a bunch of stupid people. doing even stupider things, in the name of saving their scientific research that none of them seem to actually understand....
What could POSSIBLY go wrong!?!?

Half star for actually having the nards to pitch this shit in the first place!