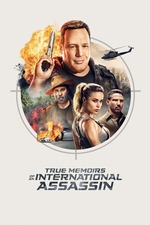 True Memoirs of an International Assassin

True Memoirs of an International Assassin 2016 ★★½

While there was nothing technically WRONG with this movie, there was unfortunately nothing that really stood out to make it worth recommending.
The opening sequence is probably the highlight of the film, which really tells you something about the rest of the film.

It just doesn't sit comfortably in any one genre, is it a comedy? maybe!
is it an action film? Maybe! is it a political thriller!? MAYBE!
But it doesn't lean into any one of these choices enough to give it any real flavour.
Also, the rating just seemed an dd choice. if they removed all the randomly shooting people violently in the head, this could have easily been a PG/Family affair which is where it would probably sit more comfortably.

this is hard to rate, because as an action film, it doesn't do ENOUGH to rate with the other choices in the same ratings brackets. and as a Comedy, I was waiting for the funny parts, which were spread far to thinly. (sorry, him acting continually incompetent and scared wasn't comedic in my opinion)