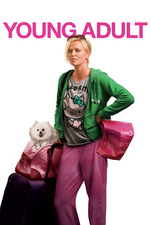 I say this as someone who really likes both JUNO and TULLY- and who really makes an effort not to rag on films of any kind, particularly small, character based ones... but this was an absolutely horrendous hour and a half. I personally found nothing enjoyable, interesting, profound, or humorous here. Sigh.

EDIT: I had a great conversation with a friend about this film yesterday. She loves it and passionately explained why. Given that we were able to have a lengthy discussion about the merits of a very subversive film, and that she highlighted the fact that I could very well hold some unconscious bias' about the type of messy female lead character that this film features, I think I went a little harsh in my initial assessment.

That doesn't mean I enjoyed the experience of this film any more than I did, or that the Patton Oswalt storyline isn't majorly bungled, but I do think the filmmakers deserve more credit for their work here than my initial flip assessment. It's not an easy watch, and while I often enjoy un-easy watches, I think I was harsh from an "un-relatability" standpoint. It's still fine that the film is not for me, but I do think it's got a deeper thing going on than I initially gave it credit for.