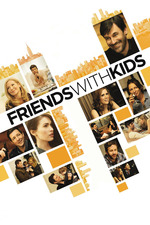 Friends With Kids was clearly trying to capitalize off the popularity of Bridesmaids, with marketing prominently featuring Kristen Wiig, Maya Rudolph, and Jon Hamm. Unfortunately, these three are barely in the movie, and it doesn't have nearly the same spirit as Bridesmaids.

Instead, we have Jennifer Westfeldt, whose plastic surgery makes her immobile face look like a particularly lazy CGI cartoon dinosaur, writing and directing a film where she gets her pick of several attractive men. Adam Scott as her best friend/baby daddy/father of her child is the highlight, but the rest of the supporting characters are little more than "married and miserable" cliches.