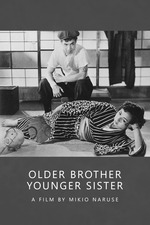 The third act is transcendent, when the tension between the older brother — both in love with and disgusted by his sister — and the younger sister (who came back to her village unmarried and pregnant) reaches a boiling point. Older Brother, Younger Sister feels like a Tennessee Williams melodrama, and so much of that is because of Machiko Kyō, in her only collaboration with Naruse, is so striking and expressive.

For those who live in New York, you have to check out some of her films in her upcoming Metrograph retrospective.