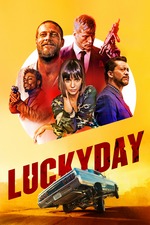 This is truly one of the worst movies I have ever seen in my life. It's just bafflingly, astonishingly bad. It's absurd in all the wrong ways (though you can tell it thinks it's being "irreverent"). Not even Crispin Glover doing a Pink Panther level bad French accent can save this one. On top of it being poorly written, directed, and (with a few minor exceptions, the lead actor Luke Bracey is charming enough to pull off some genuine sequences) acted it also manages to be racist (chock full of the laziest most dated stereotypes), sexist (though the movie thinks it's not, of course, because there's one scene where the female lead sassily tells her husband she's a better driver than him), and homophobic (Glover's character taunts some guys schoolyard style in a bar by saying "I didn't know this was a gay bar", hardy har). I've never walked out of a theatrical screening in my life, but if there wasn't a Crispin Glover Q&A after I probably would have left this one. There's a character in this movie that has a Hitler mustache that is never referenced in any way and that pretty much sums up the whole vibe of this movie.