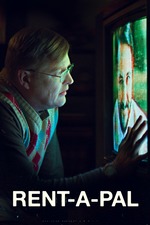 I love how this sort of vibes like if two people shared some whiskey & a joint and got into one of those rambling pop culture conversations that led to, "What if Norman Bates were an early 90s incel & instead of running a motel & dissociating into his mom sometimes, his mom was still around, had dementia, and he was her caretaker? How would that play out?" Also, can you IMAGINE if Tinder operated like Video Rendezvous and you had to call someone to ask about your matches?

Wil Wheaton, as Andy, a possible VHS demon, or maybe just a grown man in a sweater vest that combines the fashion senses of Mr. Rogers and Pee-wee Herman, is of course the draw here, and he's spectacular. His crisp, clear diction, and forcefully friendly persona had me scratching my palms up whenever he was on screen (or screens, rather). But Brian Landis Folkins as David, caretaker of Mother & imposingly large doormat, two minutes away from fully breaking, HOLY FUCK. The dude has some LEVELS.

For the majority of Rent-A-Pal, it's not surprising that David will lose his shit at some point thanks to multiple & increasingly disturbing narrative cues. Landis capitalizes on these these cues so well, though, by pulling back at several moments when it seems almost certain David is going to completely freak out. He knows exactly how to physically articulate David's toxic repression & volatile nature in a way that is realistic & nuanced.

So, yes, fans of Wheaton (myself included) and even those that weirdly might hate him (why are people the worst, really) will definitely enjoy this if solely for his well crafted, hella creepy, turn. Folkins, though, is a whole fucking ride. Super bizarre, sometimes almost impossible to watch in its more intensely curated, uncomfortable moments, and ultimately a satisfying experience for anyone that likes their horror extra psychological and full of nuanced dysfunction (it's me, I'm bitches).