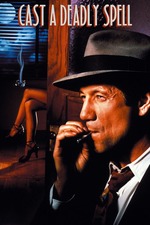 Where the fuck has this been hiding at?

Fred Ward, as HP Lovecraft, is a private detective in a 1940s neo-noir Dick Tracy that's wrapped up inside of a world where nightclub warlock gangsters can summon Stan Winston-ass creatures out of a pot of soup, paper cut tornados, and a dancing gargoyle that will rip your heart out through your spine.

All with an early 90s HBO TV movie aesthetic that feels very on brand with the Vinegar Syndrome catalog and is directed by the same behind GoldenEye. And there's a sequel to it that was directed by Paul Schrader!

Seriously, where has this been hiding??

Patton Oswalt: I Love Everything