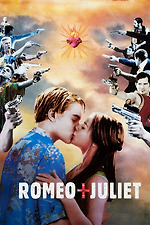 I’ve never been as glad to have been wrong about something as I am about this: discovering that Baz Luhrmann and his ridiculous, over-the-top films actually are something that I’m profoundly into is almost as lovely as watching his films is. I fell for Romeo + Juliet like I fell for Moulin Rouge!: headfirst, drinking it all in, endlessly delighted (Baz makes me want to use the word like it’s going out of fashion, as in, these violent delights may have violent ends, but they are delightful, aren’t they?)

I just can’t get behind the complaint that this film is style without substance - the style, here maybe more than in any other Baz film, is the substance, and crucially so. Luhrmann is playing with source material that everyone knows off by heart, so isn’t it much more interesting that he should play around with it? I’d go a step further, and say that I think Baz Luhrmann is the perfect director to tackle such an iconic text - what we carry from Romeo and Juliet often feels like cliché, but Romeo + Juliet never feels that way. By transposing the text to America, to the 1990s, and by making the Capulets and Montagues rival mafia empires, Luhrmann breathes new life into the play - but he keeps the Shakespearian dialogue, the rich language that feels at home in the mouths of these angsty, angry teenagers. I think what’s so beautiful about this film is how earnest it is, how much it wants to have its fun (“I do bite my thumb, sir”) and yet never winks at the audience, never tells them to laugh at these silly teenagers, who fall so deeply, so quickly, who act so impulsively.

How can they not act impulsively? It’s the only way they know how to live. In this version of the play, like in all versions, the violence that upholds society is instigated by the parents, but acted out by the kids: all the deaths in the film are a direct result of this - these young people, who seem run around so wild and so free, are just tools. They enforce the patriarchal violence that their society feeds off, without even being aware of it. This is the glory of Luhrmann’s flamboyant adaptation, it allows tenderness in as a way to combat this violence. This is the queering of Mercutio: in drag, with his not-so-subtle feelings for Romeo. It’s also the gentle warmth between Romeo and Juliet: it’s “let lips do what hands do,” it’s their earnest, open, hopeful faces as they prepare to marry, it’s the way the camera lingers on Juliet’s fingers on Romeo’s wet neck on their wedding night, and then cuts, leaves them to their intimacy. This warmth is tactile, you can’t help but yearn for them, despite knowing how it all ends. But end it must, and everything comes to a crescendo in that beautiful neon-lit church - Romeo and Juliet’s deaths are frustrating and devastating because, like the violence that seeps into their lives, they feel so unnecessary and wrong. And even though I've seen this story a thousand times, quote it semi-regularly (and never without a hint of irony), laugh at the many easy parodies both the play and the film inspire - I wept for them, Leo's Romeo and Claire's Juliet, dying in each others arms.