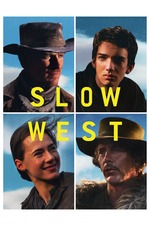 “A jack rabbit in a den of wolves.“

After their collaboration together in two short films, John Maclean and Michael Fassbender team up for the director’s feature debut in this originally fresh take on the Western genre. In Slow West we get a different glimpse of the West, avoiding the typical Americana style confrontation between cowboys and indians. Here we are introduced to a world where immigrants are trying to force their way through this lawless land. Surviving in this place has nothing to do with how well of a shot you are, it’s more about luck and being at the right place at the right time. The story, which was written by Maclean, follows the journey of a 16 year old boy named Jay Cavendish (Kodi Smit-McPhee) who has traveled from Scotland to the West in search of Rose (Caren Pistorius), the woman he’s in love with. Along with her father, John (Rory McCann), they had to flee from Scotland after an incident with Jay’s father. Jay is clueless about the West, but determined. He runs into a former bounty hunter named, Silas (Michael Fassbender) who offers his service as his chaperon realizing he will need protection if he wants to survive in this place. What Jay doesn’t know however is that there is a bounty for Rose and her father, and there are many people interested in collecting the reward. Among them there is the eccentric Payne (Ben Mendelsohn) who is an old acquaintance of Silas.

What the film does extremely well in Slow West is balance the western genre with a dry sense of humor. There are plenty of surprisingly funny moments in this film that help build the story. Through a series of fortunate (and misfortunate) events we follow these characters through their journey. Kodi Smit-McPhee and Michael Fassbender share strong chemistry together and keep us hooked during the slowly paced scene. There is a memorable scene that takes place in a store/bar during the first half of the film and a fantastic final shoot out at the end, which stands out from most Westerns. The film has a unique taste to it and some interesting characters, but the gorgeous cinematography is what stands out in this immense landscape. It’s only 84 minutes long, but it is a perfect fit for this movie which ends in memorable fashion. It took its time to grow on me, but the more I think about it the more I end up liking this film. I’ve always been a huge fan of the Western genre, and adding Michael Fassbender to that mix only makes this an even more rewarding experience.

Slow West is stylish and uses its gorgeous landscape very well (it was actually filmed in New Zealand), but it also includes a dreamy atmosphere and plenty of humor. There is a scene during the beginning of the film where Jay is looking at the night stars and pointing his gun towards them and as he imaginarily shoots at them, they light up. There are plenty of dreamy sequences like this one, but there is also plenty of dry humor as well. There is a narration over a camp fire about an outlaw who wants his very own wanted poster. Ben Mendelsohn’s eccentric coat is also a feast for the eyes which adds its comedic touch. Slow West has a great cast and it is a film worth recommending.