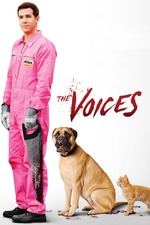 “Do you ever hear voices?”

The Voices is a bizarre dark comedy starring Ryan Reynolds in one of his best performances to date. It is directed by Marjane Satrapi who’s better known for her Iranian Oscar nominated animated film Persepolis. The Voices takes a common element from animated films and applies it in a dark way here in this live action movie. We can all recall the classic angel and devil scenes in the Tom and Jerry cartoons where the voices tell the character what to do. Satrapi takes that familiar premise and applies it extremely well here as Reynolds’s character speaks to his pets. His dog, Bosco representing the angel, while his cat, Mr. Whiskers represents the devil. They are both voiced distinctly by Reynolds in a humorous way. Despite having some serious psychological issues, Reynolds’ character is likable and we get to see things through his perspective. Satrapi does a great job of making sure we identify with his isolated character before presenting the world as it actually is instead of through his eyes. The Voices has some tonal shifts and does become a bit less interesting towards the final act, but the buildup is rather engaging and funny. Having Gemma Arterton, Anna Kendrick, and Jacki Weaver in the supporting cast is always a huge addition and they all deliver solid performances. The Voices is one of those films that has its flaws, but despite it all feels unique and inventive as you never quite know what direction the film is going to go to next. It’s a quirky film that benefits from a strong and memorable performance from Reynolds who manages to make his character likable despite the horrible things he does.

Ryan Reynolds is Jerry, a quirky but charming guy who falls for one of the employees at the bathtub factory he works at. He seems likable, but it is easy to see that there is something off about him. His crush is played by Gemma Arterton who doesn’t seem too interested in him. She works in the accounting department along with Lisa (Anna Kendrick) and Alison (Ella Smith), whom she likes to spend time with after work. One night they invite Jerry along and Lisa seems to have a liking for him, but he insists on courting Fiona (Gemma Arterton). One night she stands him up for a date and things take an interesting turn. Jerry isn’t a very social person, but we get to see him interact with his pets at home. Jacki Weaver plays his psychiatrist, Dr. Warren, who tries to help him in his attempts of courting Fiona but reminds him he mustn’t stop taking his pills.

The Voices is offbeat and some tonal shifts may take you out of the movie, but it works thanks to Reynolds performance. His schizophrenic behavior is a good explanation as to why the film seems to change gears from dark comedic moments to horror. His voice work is impressive and it lightens up the mood in an otherwise dark film. Satrapi has managed to direct a unique film which is hard to categorize because it switches gears on us. The greatest thing about The Voices is how well Satrapi manages to portray the world through Reynolds’ eyes during one moment and then present things how they really are in the next. Despite losing some of its appeal during the final act, I still enjoyed this and found Reynolds performance to be worth recommending. It’s messy, but at the same time remains stylish and inventive.