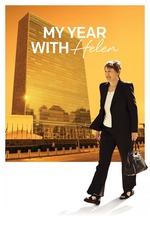 My Year with Helen

Seeing as of writing this I am one of only 40-odd people to have logged this film on here, and it seems from the scores I have given it the lowest score currently of any reviews it seems I should justify my score with some written words.

Gaylene Preston's documentary 'My Year with Helen' is a perfectly fine documentary, covering the approximate year of Helen Clark's bid to become the Secretary-General (SG) of the United Nations. The simple point of my low outlook is the documentary itself struggles to create a point.

'My Year with Helen' is more 'My year at the U.N.' than it is about Helen Clark in some respects.... the year with Helen is focused not so much on Helen's efforts within the UN than it is on the SG voting itself. It also focuses on the push by individuals and organizations for representation by women. Perfectly fine topics, however, the documentary provides two major flaws to these subjects within it's own content.

Firstly, Helen is happy to put herself forward but pragmatic about the realities of possibly becoming the SG in the way the U.N currently works (while simultaneously making the point that the U.N. needs to work better at this point by being refreshed!).

And second and more importantly while she clearly supports women's rights and the ideals of a woman becoming the SG of the U.N., at the core the point she really believes is that the best person for the job - regardless of gender - should be considered. These undermine the position Preston herself puts into the narrative, especially when spending extended time with a professor from Yale who so much wants a female figure head in place after 70 years of Male only SG's.

On paper, it appears Clark is that person. And instead it would be much more compelling of a year to have spent more of the runtime discussing the work she had done in the several years to that point with the UNDC in much more detail, and how this impacted on her for even putting her hand up for the role (completely glossed over in the documentary with a baseline graphic!). This would go to great lengths of far more impact, that someone so obviously placed that should be considered a very strong candiate is being looked over for closed door backroom deals and the status quo of five powerful nations.

The content on Clark's efforts at the U.N. itself are light. Numerous people refer to Clark's efforts at the U.N. and the fact she is popular internally, maintains a heavy and popular social media presence, and makes things clear and transperant for her department. It appears she has done a lot of good, but aside from a few scenes of diplomatic visits - and a great scene with a strong group of women of Botswana, little is actually said about Helen's role day to day and backing up her role and why she is as goof for the SG role. And as a person, she isn't challenged in discussions by Preston on any of this. The most you get are the great scenes with her elderly father, where Helen lets her guard down the most (and also one great scene when described as 'warm' in a televised debate - she mockingly attacks one of her staff for a laugh).

Otherwise this documentary would be more compelling at the opposite end, not focusing on Clark's efforts alone but looking at the potential flaws in the voting system, looking at all of the candidates who put themselves forward and who would have been great choices, and working out what the U.N. should do to fix the way its voting system work where it's not so heavily weighted towards 5 large nations to decide who leads only for their own self-serving best interests. This of course seems a bigger picture than a smaller NZ doco would go for, so instead why not push further down on what makes Helen Clark so brilliant for the U.N.? And then it would become even clearer of such a crime that she, and other strong females, were overlooked?

The film touches upon all of these subjects but never goes in deep on any of them enough. Potentially of course Clark just was too busy for extended interviews while at the U.N, however following her choice to leave the U.N. after 8 years, it seems like a great point to have returned to talking to her at her home in New Zealand - where a little less guarded - she might have had more to say about the U.N. and the whole thing in general with more time to do so.

Somewhere in this documentary are several great stories, and even the narrative Preston wants to present is perfectly decent - it just feels like however in going for this one vision she missed the chance to go for the much bigger picture - either on Clark's efforts or the U.N. itself.