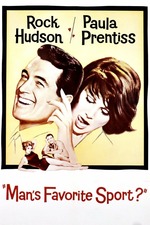 Seeing this after rewatching both Bringing Up Baby and Some Like It Hot clarified why Hawks' brand of madcap, irrevent comedy works for me whereas Wilder's (in the case of that film, anyway) doesn't. As with Bringing Up Baby, the humor in Man's Favorite Sport comes not just from the series of comic incidents but from the hapless protagonists' attempt to maintain sanity and dignity throughout each increasingly absurd ordeal. More than almost any other director, Hawks gives us a sense of the narrative as something that actively imposes itself on its characters, something that is happening to them. This tendency is even more clear in this epitome of the late-period work, where comic incidents have an almost post-modern absurdity to them, than in Bringing Up Baby, which, as anarchic as it is, does a better job of passing itself as a typical-for-its-era Hollywood romantic comedy.

Hawks, then, is working with the space between genre and character, with genre as the motivator of narrative and, in this case, with comedy as the genre. Dan Sallitt's comparison of Philip Marlowe in The Big Sleep to a character in a video game proves fruitful; in his dramas, Hawks' protagonists are masters of their narratives, while in his comedies, they have to keep playing catch up (expert players vs amateurs). Like Katharine Hepburn, Paula Prentiss acts as the agent of the narrative's chaos, and like Hepburn ends up seeming borderline sociopathic as a result. Cary Grant/Rock Hudson, meanwhile, is constantly forced to explain how they've ended up in the binds Hepburn/Prentiss have put them in, inevitably sounding either nonsensical, either a madman or a liar. The suggestion would seem to be that comedy as a genre is both sociopathic and illogical.

The cynical Billy Wilder would likely agree. To generalize this approach, considering both directors were adept at switching from drama to comedy and back again, I think Wilder and Hawks both think of narrative as a potential problem which they have to solve through the film. In the case of the comedy, that problem is figuring out how to create enough of a plausible throughline that we buy the logic of something fundamentally illogical, and then to figure out how to have its characters react to the illogic and cruelty of the narrative machine in recognizably human ways. Wilder's solution is to go for these little bits of motivational shorthand so that the characters are buffeted along from narrative point to narrative point with as little mess and trouble as possible. This sometimes works (as when Jack Lemmon very quickly accepts his Daphne persona, even creating his own drag name), but can also feel dispassionate and ill-considered (as when Marilyn Monroe simply offers that she's dumb as justification for her acceptance of Josephine's deceit).

Hawks, on the other hand, provides his characters agency by always letting us into the process by which they cope with their increasingly ridiculous situation. He also allows them moments of respite in which they are able to exist outside the narrative machine and engage with each other as people rather than as characters within a text. Thus, when the romance is consummated by film's end, it does not feel like an obligatory necessity of the genre, as it does at the end of Some Like It Hot, but rather the natural endpoint of a camaraderie that has been created throughout and apart from the film's genre.