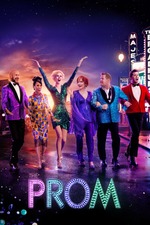 I did not see The Prom on Broadway. I remember it being advertised as a brand new show, but I was seeing some older shows before they closed. Ryan Murphy's film adaptation makes it pretty easy to imagine how it would play on stage while simultaneously taking advantage of the cinematic medium by staging each song as a music video. That alone makes it a success. Better camera placement and less frequent editing would have highlighted the choreography more, but what we do see is dazzling.

As to the musical itself, it's a charming story about acceptance and the transcendent power of theater. Act II flounders a little, becoming overly heavy with plot points spacing out the songs too much, although I understand some of those scenes were added for the film. Matthew Sklar and Chad Beguelin's score has an infections energy, which easily carries the musical.

Emma's (Jo Ellen Pellman) two "I want" songs, "Just Breathe" and "Unruly Heart" ground both acts of the musical, with the four actors' numbers being surrounding showstoppers, making it clear that this is primarily Emma's story. The first is a catchy, upbeat song that sets the conflict for the show while conveying Emma's optimism and resolve, and the second a heartfelt ballad that sets up the finale perfectly. Dee Dee (a delightfully and appropriately over-the-top Meryl Streep) threatens to steal the show with her two phenomenal solos, "It's Not About Me" and "The Lady's Improving," but Chad Beguelin's lyrics highlight her narcissism and the irony, which both serve to remind us that it is Emma's story whether the actors realize it or not.

Nicole Kidman and Andrew Rannells don't have too much to do as Angie and Trent, and I wish their parts were a bit more substantial, but that's clearly a weakness of the original show. Still, their respective numbers are excellent. After the disaster that ends act I, Angie's "Zazz" restarts the plot and provides encouragement for Emma. Making Trent's "Love Thy Neighbor" the "11 o'clock" number not only provides energy to the show but an inspiring change of heart for the high school students.

There's been some criticism of casting James Corden, and while I never entirely believed he was actually a flamboyant gay man (partially because he's not), he has a screen persona that works well for the character's enthusiasm and ultimate support of Emma.

The rest of the cast is excellent, and the subplot about the power of theater fits perfectly into Emma's story not only through Keegan-Michael Key's principal, but also how the actors shift from helping themselves to helping Emma. It's a shift that the score captures perfectly through an opening number in which Dee Dee and Barry celebrate themselves to a finale that celebrates the value of diversity and what everyone has to offer one another.