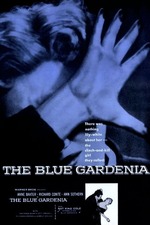 I watched this only a few days after seeing the 1947 film "High Wall," and was struck by how the two films tell much the same story with genders reversed. In this one, Anne Baxter plays a phone operator who goes out with a lecherous artist (Raymond Burr) on an impulsive whim after being jilted by her boyfriend, a soldier stationed in Korea. On their date, Burr tries to rape her, and Baxter blacks out in the ensuing struggle, only to find out the next day that Burr was found dead in his apartment. The search is on for the "Blue Gardenia," as the unknown murderess is dubbed, and Baxter begins to unravel under the guilt of her secret. Richard Conte plays a reporter who is desperate to crack the case, and who makes an outreach to the murderess, promising to help her if she'll only come forward. Of course Baxter does, and of course it turns out that she wasn't the murderess after all, but there's absolutely no mystery surrounding who actually did it, because the real murderer isn't a character we've already met, but rather is introduced at the very last moment simply to give the film some resolution.

Lang could usually be relied upon to give us stylish, memorable movies, but this film isn't particularly stylish or memorable, and feels like it could have been directed by anybody. The romance between Conte and Baxter feels perfunctory, and it doesn't go anywhere. Ann Sothern plays Baxter's roommate, and I was at first intrigued by the fact that she and Baxter look almost exactly alike -- I thought maybe the film was going to make some comment on the interchangeability of women in the eyes of male predators, or something like that, but it doesn't. It's all very straightforward, with none of the psycho-sexual subtext that makes so many other noirs so juicy, and it's all very dull.