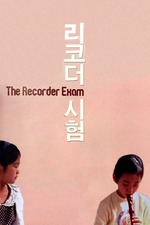 There's something to be said for making a film just as long as it needs to be. This graduate short film is set in 1988, following a character approximately the age of the director back then, and presumably forms something of an autobiographical pair with her 2018 feature film House of Hummingbird (set in 1994), both about a central character called Eunhee. The film is titled for the exam Eunhee is preparing for, but really it's about the dynamics among her family and effectively gets inside her perspective, finding great emotional turbulence in her bullying older brother (who blithely asserts his own studies are far more important), her seemingly rather depressed dad who finds it difficult to praise her, and her emotionally distant mother. Because it's from Eunhee's point of view, it hints at traumas within the family, without them ever being clear, just these little hints at a story that continues beyond the understanding of its 9-year-old protagonist.

Ottolenghi and the Cakes of Versailles