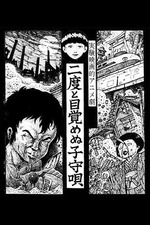 The Death Lullaby is the coming-of-age of the concept of alienation itself, starting with interpersonal child abuse and ostracization, building up to a large scale late-capitalist embodiment with the story of a small village that’s forcibly demolished for the construction of a bullet train, both narratives being congruent with the history of the construction of Narita airport. A boy with a severe buck-toothed underbite is cut off from his mother after she contracts an illness that causes her to cough up blood, and at school he's mocked for his physical deformity by the other kids from wealthier homes. They are able to afford TVs in an immediate post-WWII 1960s Japan while the boy with the underbite just has a photo of his sick and dying mother. The surrounding toy stores are riddled with propagandized ads that preach morbid militaristic messages like "Men die silently", "A new mech that can kill 10.000 people at once" and "Men fight in the battlefield of love and romance. War is the romance of men". The boy unwittingly absorbs the nonstop violence and hatred around him, and he eventually snaps when his mother commits suicide while still in the hospital.

There's a lot I could say about this film, it's honestly one of my favorite animations in general. While public copies of his films are scarce, Hiroshi Harada is in my opinion one of the greatest living artists in animation. Outside of his skill in the craft itself, his films are intricate sequential exercises that extensively mix Winsor McCay-reminiscent frame-by-frame paper animation with paintings, newspaper clippings, and live action video from sources ranging from original shots of bleeding doll heads and blood-covered tissues to newsreel footage of the destructive effects of environmental pollution. The Death Lullaby is densely put together with nonstop montage experiments. Harada's depictions of ero guro possibly started with a song he wrote in 1982 titled Breeding Underground, which he's described as taking influence from Karl Marx's Capital. From that, I've wondered whether or not Harada's depictions of violence are all influenced by the overall concept of alienation, based on his experiences as a leftist in the largely politically conservative nation of Japan. The film is filled with political tension, a brief capsule of ero guro's early politically motivated punk art years before eventually being commodified into a sort of subgenre of hentai pornography with the late-90s and early-2000s.

The animation is really impressive, especially knowing it was done entirely solo with no studio backing. The music is Morricone-reminiscent at some points, with the ending featuring a melodic death-march that accompanies an intense montage of mankind's self-destruction through late-capitalist excess that fills the last-6 or so minutes of the film's runtime. Keep in mind, this was all done when he was in just his early-20s! The man is basically a cinematic force of nature. It's a shame that info on his films has been somewhat clouded on the American corners of the web recently with walls of false-information.