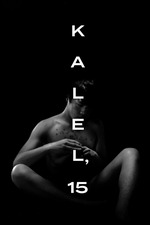 We don't really know why Kalel ends up with HIV, except that we do. It's because we don't talk about it. It's because we aren't treating it as seriously as we ought to. It's treated as a dirty secret, a stigma, rather than an epidemic that needs to be addressed right away. It's because the Philippines is a Catholic nation, and that entails many deficiencies in the way that we deal with acknowledging the very idea that people have sex. It is unthinkable, because thinking about it would mean having to broach uncomfortable subjects. It is because hypocrisy surrounds the kid, the people around him apparently incapable of recognizing their own participation in this sexualized society, and unable to find in themselves the empathy to help Kalel when he really needs it.

The movie is in stark black and white. It's like an admonition in itself; like this whole town doesn't deserve color. Later on, the frame gets smaller. Inside the square, we see the world closing in around Kalel. He keeps living, keeps trying to find some measure of hope in this black and white world. But everyone keeps letting him down.

There is anger in this film, but it's the productive kind of anger. It's the kind of anger that leads into real insight, the kind of seething rage that leads to clarity. Kalel exists within a societal context that refuses to acknowledge the reality of sex. This film systematically and painfully draws out the consequences, funneling it all through the experience of this one kid who deserves a chance, but is never going to get it.