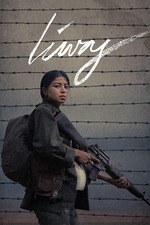 Films this personal don't really fall under the same metrics as other films. It's easier to overlook the flaws: the uneven pacing, the occasionally hokey dramatics, and the TV-ish treatment of the story. Because the film very easily gets across that this is Kip's story, and this is the way he wanted to tell it. And the story is indeed remarkable, and one that just needed to be told. And people really ought to see it, because it is, in spite of its flaws, a really lucid retelling of a dark time in our history from someone who experienced it firsthand.

But I ended up liking the film more for the irony inherent in its creation, the cosmic points it scores against a legacy of tyranny that the Philippines can't seem to shake. It feels like a victory, even though I ended up not really personally engaging with the film for its cinematic qualities. But that it exists is a little miracle, and I can treasure it on that level.