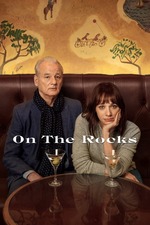 I have plenty of tolerance for Bill Murray being rakish and flighty, but I still got plenty annoyed at this. I think what bothers me that most is how much of a caper it is. There's real stuff to deal with her: the creeping resentment over a partner who is often away, who seems to be living a whole other life, compounded with a coming to terms with feelings over her father's infidelity. But the way in which the movie deals with it involves low-stakes espionage that doesn't lead to much, and is only possible because these characters have the time and money to waste on these hijinks. When all is said and done, the central problems haven't actually been dealt with. They're just kind of hand waved away as the characters having gone through enough to learn a proper lesson.

I did like the scene where BIll Murray stuck his face in the flowers, though. That was funny.