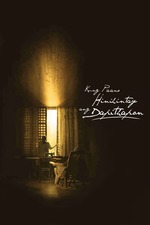 There is a kind of film you come to expect from Cinemalaya: small, human dramas modest in scope and ambition, visibly working within the limitations that come with the festival. These films are usually fine, but they also tend to become forgotten. This film will likely be lumped in with all those other films, though it does color outside the lines a little more than usual.

Take for instance the lengthy scene where Bene has his coffee, just listening to this comedic song on the radio. It's a small thing, but here the movie expresses some really compelling specificity about the character, where he is, and where he's from. He sits there silently, listening to this strange, macabre song about a man failing to kill himself for one silly reason after another.

It is this silence that comes to define the movie. This is a small film, and it allows a lot to go unsaid. It doesn't even resolve the stories of some of the other characters. But that's part of the design: the younger people have a lot of life left to live. The central trio have already gone through all the drama they're ever going to need in their lives, and at this point, it almost feels more meaningful to fret about smaller things. It's an elegant adult drama with modest, yet oddly substantial charms.