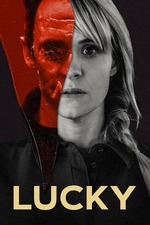 En route into being the first four star rated film of this year in my book before the entire third act happened. Truly, as a feminist arthouse slasher, Lucky nearly has in it to be the perfect, whole blend of all those aspects while coming off as a genre film of its own, boasting a fantastic leading performance by writer Brea Grant as the catapult to which the film initially delivers and ultimately suicide bombs its own essence. Why's that, you may ask? Well, perhaps there's a reason why "slashouse" isn't a concrete thing yet and in spite of its title, this film isn't lucky enough to successfully hold the honor of being the first of its kind. Lucky is directed with straight laced vision by Natasha Kermani from Grant's uneven script, the latter having made several lasting impacts within the horror indie scene over the past few years. Fortunately, her latest outing is interesting enough to warrant a fresh look for the genre yet it still showcases an aptitude for unrestricted vision filled with popular allegories over a good storytelling tinged with metaphors. As a story about a post successful self-help author and married woman who has to deal with fighting for her very life against an potentially supernatural, anonymous male assassin in the midst of night at every night; it's never a question of will she kill in order to survive but how will she kill to survive.

From the premise, it's crystal clear as to where Grant and Kermani receive their inspiration from - mainly Happy Death Day/Groundhog Day and you can also make an argument that Lucky is merely just HDD inserted with topical gender issues and an overtly serious tone (though it does venture into deadpan from time to time). For the rest of the movie and much like May's pseudo supernatural trapping, its narrative is as well stunted, unable to move beyond artificial allegorical coating that is at its most insufferable near the very end. Like, I "get" what the gist of it all is seemingly about; with the assault of the physical embodiment of female trauma/oppression and the untold psychology of *women* as they experience daily horrors of sexism and the like. BUT the longer Grant's script goes down the "waking" hole while attempting to balance character-based drama with epic, metaphorical ideas, the easier it becomes to spot the underlying flaws, by which the addition of a few unnecessary details espeicially towards Grant's character managing to flip the viewer off. And in particular, how snobby and entitled she comes off at the end despite the film's preach for and analysis of victimhood in women. However, it all really just feels overgeneralised in this movie because of how it's handled, with the slasher horror part of it merely utilized as a shell to get "this gender-societal point" across. Almost as if the filmmakers are embarrassed or unable to come up with a true narrative-driven horror and instead coasting on the current popularity of the genre to strictly deliver a message but without any narrative payoff. In the end, Lucky straddles a fine line between slasher and arthouse up until the pretentiously abrupt end. It went from being horror-metaphor to strictly metaphor, which is often the ultimate sin in the arthouse section of horror filmmaking and by which its ideas could make for a stronger case using the leanness of short film than the convoluted mess of a feature it's now.

Luckily (or not), the other technical aspects of the film still should not be burdened by the poor script, as director Natasha Kermani and
Co appear to manoeuvre the visual storytelling around as confidently as possible despite it not being so. Her work, strengthened by DP Julia Swain's high-class cinematography, shows elegance in handling an abstract concept also as seen in her previous feature film Imitation Girl (2017), which ironically suffers more or less similar problems as to this one. I'm not sure what it's with the prominence of oceanic blue color in this but as far as visual aesthetic goes, it's very pleasing to look at regardless. While the surrealist atmospherics mixed in with adept deadpan humor is properly managed and has the film to be entertaining for most of its runtime. It's really not until the third act that most of these elements fall apart in a laughably ridiculous way, that even Kermani seems to stumble around when there's a scene where May and her husband reconciles and there seems to be an aura of "wait, what the fuck are we talking about again?". No dent to Grant as an actor though, her performance is irrefutably fantastic from start to end and you can practically feel her frustration and fear of going through her daily life which includes having a masked killer trying to one-up her every freaking night. If only her writing work catches her performance instead of the killer then there wouldn't be any problem. The first act, where May first learns of her situation and everyone around her just acts either nonchalant (the cops) or overly sensitive (her husband) about it, is the best portion of the movie and where Grant's writing and Kermani's directing at their sharpest, equipped with self-awareness of the slasher genre along with an effective dose of suspense to snatch the viewer's attention right away. In fact, there are actually quite a number of great sequences involving all of the cat and mouse fights between May and the killer, Chase Williamson's anxiety-inducing and surreal cameo, and an epic climax in a parking lot (even though it's let down by the true "ending"). And it has a banger of a synth soundtrack too; bless the synth, brothers, for they make a movie's atmosphere like a boss.

Overall, because of its hip, metaphor-based storytelling it's bound to be of strictly niche interest for the audience unfamiliar with its usage. Sadly, it's for that exact reason Lucky is well worth below the four star rating, and almost painful to think of what could be better as the first two acts are THAT good. It just had to go down that route.

P.S I like the message and the things that Grant is trying to communicate, it's the delivery that sucks the film out of the message.