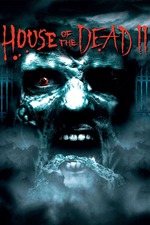 House of the Dead: Ranked

was dozing off trying to watch this yesterday so i had to finish tonight.

so for the worst part 2 requirement i also added the condition of it needing to be a sequel to a film that i had either already seen or was willing to see first. factoring in this and the fact that i had unfortunately already seen Birdemic 2 this was my next option.

as something of an apologist for the first film (i don't really LIKE it but it's fun and i love the trashy gameplay sequences just slapped down during the fight scene) this was a disaster. everything that set aside the prior film (for better or worse) from more standard zombie fare has gone out the window and that leaves you with a bottom of the barrel romp through tired subgenre standards. is it fair for me to factor in years of zombie fatigue that have baked in over the years since this has come out? probably not but too bad.

it seems that there was to be a third entry in the series that ended up being named something else. this is cursed knowledge to stumble across when you're someone like me. please send me your good vibes in this difficult time.