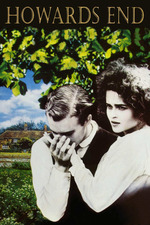 When encountering upon a Merchant-Ivory, it is simple to lose oneself in the details that they reproduce on screen, tackling upon period pieces that envelope audiences through the remarkable obsessive production design, a transportive experience that is almost unmatched even to this day. Howards End rarely ceases to amaze on the visuals that it provides, accompanied by a warm glow that seems to heighten the beauty that surrounded England during the turn of the 20th century.

Once we have accustomed ourselves to the beauty, we begin to find that more treasures are to be found in the film’s story and the themes that are being explored, led by a middle class woman, Margaret Schlegel (Emma Thompson), who finds herself befriending a dying neighbour of the upper class, Ruth Wilcox (Vanessa Redgrave), whose death has bequeathed Margaret her countryside home, the film’s title. But Ruth’s husband, Henry (Anthony Hopkins), quietly denies Margaret of this information, and eventually finds himself attracted and married to her.

Within the mix is Margaret’s sister, Helen (Helena Bonham Carter), who is committed to her principles and views, pointing out Margaret and Henry’s relationship to be unfavourable, and with this, attempts to aid the defeated position of a couple from the lower working class, Leonard (Samuel West) and Jacky Bast (Nicola Duffett), antagonising the cruel outlook from Henry towards them.

Director James Ivory explores the division and customs of the various social classes, the desire to sustain the lifespan of these classes, even if it means to distill their sense of compassion towards others, and the polarising ideals of practicality and sentimentalism. This is a film that does not press upon its themes with artificiality, but instead it appears on screen with natural spontaneity, reinforced by the arcs of its characters, unforced by a narrative structure that would have its audiences predicting their outcomes.

It is certain that the performances brought upon by its cast that allows Howards End to resonate with its audience, characters that are fascinating and open for analysis, yet resistive of over-complexity and our link towards them exists in the emotional core that exists beneath them. Pair these performances with the film’s escapist visual design, Howards End is a film that would undoubtedly continue to entertain audiences in the decades to come. A film that cherishes the source material and the inspired period that it is set on, but without a sense of ego that calls upon itself to be admired, it simply exists and speaks for itself.