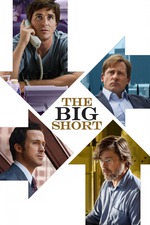 Very few films in recent years have frightened, shocked, angered, and saddened me as much as The Big Short has, despite the fact that all of its micro details are still left with gaps for further understanding, the emotional heft of its subject matter remains palpable and most importantly, penetrating, as even a young kid like me during the recent recession was felt through the defeated eyes of the common man and woman, much like this film, my understanding at the time may be limited, but its overall impact lingered and traumatised.

Adam McKay, who has shown a strong interest for such intelligent economic matters through his last two films, Anchorman 2 and The Other Guys, to show how white collar leaders are destroying the integrity of what was once pure and strong through economical corruption and decline, but it through here in The Big Short that such matters finally become the central matter to his storytelling, that no longer the personal character development of his individuals would act as the film’s primary motivator. It is in the agenda of its “protagonists” that we follow, and through the film’s smart script, we crave for their successes, to see them succeed over the stupidity and corruption of the system, and we do so, in ways that consistently become entertaining and necessary with multiple storylines and characters, to perfectly capture the grand scope of the circumstance, and thus leave its audience with a greater ripple than simply attending to such matters with a reduced and sentimental mindset.

The film’s filth is palpable, where the idea of a hero in such a story is eliminated, as everybody that is involved in the game would lead to an outcome of profit. The journey of these men may be crafted with an exhilarated spirit, but it is in the depiction of the accurate catastrophe, the sense of melancholy that arrived with the collateral damage that remains with us after viewing the film. It trudges through a piece of our history that we are certain that were felt, but were ignorant of the details and mechanisms that led to such an event. McKay finds opportunities to explain to its audience, both in highfaluting and dumbed roads, in the aim of capturing a broader scope and simply having its point made across.

Rarely does the film faults in its beat, due to the outstanding performances derived from its cast, selling their characters with excellent depth, convincing us beyond of their star-studded statuses, that they have lost themselves within the goals and emotions of these characters, amplifying the realism that is attached to this particular subject matter. I believed that such figures existed during such a crisis, that their voices were ridiculed and belittled by the greedy and ignorant entrepreneurs, assuming that such ideas and investments were an act of idiocy and moral antagonism.

McKay has assembled the needed pieces of telling such a story and leave upon the impact that is desired through the intriguing choice of casting, the top tier production values, the striking balance between humour and drama, the breezing sense of pace, and the dense dialogue that is appropriately splurged by its characters. It currently stands as McKay’s most realised film, an eye-opener of not just the content at hand, but also of the elegant skill of the filmmaker, who was once considered a run of the mill comedic filmmaker that hid behind the successes of his collaborator, Will Ferrell, only to find himself creating the most perfect interpretation or angle of the economic down turn of 21st century. It is certain that such a film would open significant doors for McKay, allowing for more ambitious projects that would solidify and redeem him, notably from those who have reduced him to the intelligence of some of his films’ humour. However, going through his filmography has shown me that the man has already shown such excellent strengths in his filmmaking since his debut, it is simply hidden behind the cloak of silliness and laughter. McKay may have constructed a more or less fun ride with much of The Big Short’s runtime, but one can guarantee that the laughter would be none by the time one has endured through its entire running time, left only with a dropped jaw and a tightening pain in the chest, as we ponder on the catastrophic reality that had befallen us.