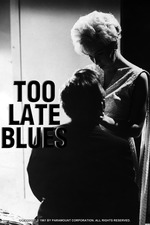 Though famed for the director’s independent works. Too Late Blues marks as a sort of crossover between John Cassavetes directorial indie sensibilities and the studio structure that nurtured him as an actor. As it navigates the pride, alienation, and resisting idealism of Jazz bandleader, John ‘Ghost’ Wakefield (Bobby Darin), it also feels like a reflection of Cassavetes’ own work ethics placed under judgement - possibly projecting his internal fears into this spiralling downfall. Though much of the production feels more so at kin with the quality that is normally found within the studio system, Cassavetes manages to insert his own trademarks in the process. What we commonly find are elongated takes that utilise an observant view on characters and their relationship with the surrounding space; an emphasis upon cutting to faces for emotion; and scene progression, dialogue and performances that emerges and flows organically. The film exists as some sort of hybrid that many may claim as a tragic compromise, but for me, it reveals itself as a surprising feat.