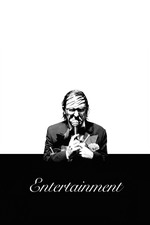 Initially, everything was clear. The film opened in a graveyard of dead airplanes - machines intended for momentum and transference locked firmly in place without any hope of exit.

The first performance is in a prison. The Comedian is as locked in place as his "captive" audience (OOOOOOH).

His next tourist venture? An oil field, the landscape choked with rusty machines. The Comedian breaks off from the tour group to stare at one. It goes around, and around, and around. The same programmed motion, making no visible progress in any particular direction. This cycle? It no longer serves a purpose. This is what it does, and that's why it does it.

But Alverson's already proven himself quite adept at taking non-descript locations and mining them dry for metaphorical potential in The Comedy (that empty swimming pool?) The mastery of this same facet of Entertainment wasn't a surprise. No, the surprise here is just how far into a cerebral nightmare space Alverson proves willing to follow his protagonist, choosing to progressively disintegrate reality into Mexican soap operas, unanswered phone calls, endless strings of "Whyyyyyy's?" and heavily gelled lighting cues.

I was so confident I had a grasp on Entertainment from it's opening moments. My expectations for a follow-up to The Comedy where being hit. I can't help but feel that I fell into Alverson, Turkington, and Heidecker's trap. And the resulting Entertainment? All the better for it. The Comedian is a near resolutely static protagonist - the same vein could of course be tapped time and again, but the film instead chooses to draw into its protagonist. First outside, an observer passing judgement on a life more than likely irreparably broken (culminating in a scene of some of the most uncomfortably unwarranted and brutal verbal harassment I've ever seen), and then switching focus to turn this world inside out, and show it from The Comedian's own head. Subtly cued metaphors for repetitious cycles of entrapment become far more literal, overwhelming, and surreal as each minute passes by.