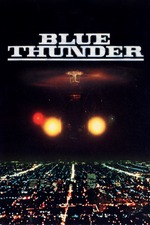 Watching a gritty Roy Scheider left me wanting more Roy Scheider. As a bonus, I got some top-notch Warren Oates and ace Candy Clark, too — it’s a small role, but she owns it.

In the 80s, when we had our choice of fancy, hi-tech vehicles, from KITT to Firefox to Air Wolf, my pick was always Blue Thunder. Glad to see this mostly holds up.

The helicopter chase scenes are still pretty fun, even in comparison to more sophisticated modern day ones. And the movie’s warnings against dwindling privacy, increased surveillance, and a militarized police force are as relevant as ever.

With this and WarGames, John Badham demonstrates a good feel for dramatizing the threats of technology. (Though, I’m not sure he quite captured the implications of robotics and AI in this one.)

Even the titty shots in this, which is played for humor and might seem like a gratuitous 80’s cliché, accurately depict a grim truth: If you give men powerful technology, inevitably this is what they will end up doing with it.