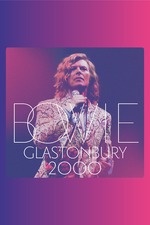 By all accounts, including from those who would know best, it was a special night. Bowie reclaimed his past and recaptured his height, playing all the good stuff again, not just the new stuff.

And the man looked good, too. Fifty-three years old, but he’s as ageless and striking as ever, with his bipperty bopperty coat and golden flowing locks. He looks like him.

The rest of the faces are almost as familiar: Garson, Slick, Campbell, Dorsey, Plati, and Palmer — representing the 70s and the 90s, as well as a good chunk of the years that lay ahead.

But by this point, there is no Eno. No Gabrels. No end-of-millennium, three-album cycle of art rock being performed at the Salzburg Festival, as promised. Instead, Bowie in the year 2000 is an upbeat greatest hits set, back at Worthy Farm. I watch and wonder what might’ve been.

I suppose it must be as they say, Bowie at a peak. He looks great; the band sounds good. There’s some initial indifference from the crowd (Caitlin Moran’s essay in the liner notes begins, “I will be honest — we took David Bowie for granted, that balmy summer night in 2000…”), but he wins them over by the third song (“And there it went: the unmistakable electric wave, from the stage to the back of the field… The place had, finally, plugged into the generator, and the generator was Bowie”). And he seems to be having fun, even if he didn’t really want to be there (Bowie’s diary, 15 May: “I really don’t remember why I agreed to close this year’s Glastonbury Festival in the first place. It couldn’t be more inconvenient in a way, now knowing that our pregnancy is well and truly for real…”).

The Bowie I loved most would show up again, briefly and spectacularly, at the very end. And it’s true that even though he’s gone now, some of his spirit is still alive and kicking. But like Glastonbury, it’s a small consolation.