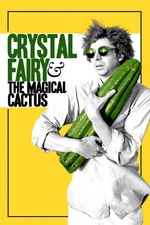 Sebastian Silva has done a much needed, fairly remarkable service for the career of Michael Cera: he's given him two consecutive roles to finally break the quirky actor out of the typecast characters that he has been stuck with for ages now.

In both Magic Magic, and now Crystal Fairy, Cera offers up new sides of his comedic persona, bringing forward notes of incredibly bizarre awkwardness unlike anything we've seen from him before. It is obvious that Silva pushes him to strive for new depths, and he achieves wildly enjoyable results in both of the writer/director's new films. It's hard to say which of the two performances I prefer over the other, so I'll go ahead and call it a fair wash. In Magic Magic he was strangely horrifying while always maintaining dark humor, and in Crystal Fairy he possesses a lot of the same qualities, but as a far different person.

Both of the films are set in vast landscapes of Silva's familiar Chilean territory, and each also feature only a handful of actors going a tad insane as they spend more and more time in the expansive nothingness. Where Magic Magic was the eerie, psychological mindfuck, Crystal Fairy is its comedic, drug-riddled companion. Make these two a double feature.

The Kings of Summer