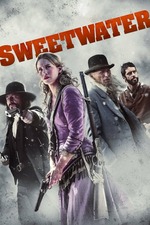 Whoever thought this one was worthy of funding and distributing needs to be analyzed for any mental health concerns. There's very little good that can be said about it. I suppose the overall mood created by the cinematography is fine but could have been enhanced into something more had the characters been convincing and the dialogue sharper.

January Jones is trying, I'll give her that. But she just doesn't have what it takes to break out of that same "January Jones" approach to any role she has ever played. There is simply no change of tone, facial expression, or indication of even a sliver of range on her part, even though her roles have in the last few years at least shown she is legitimately trying to change it up a bit. Although she isn't the only thing wrong with Sweetwater, she certainly distracted mightily from my overall experience with it. To be fair, there really isn't a performance in the movie that comes out on the admirable end. Ed Harris is the closest to come to breaking free from the shackles of the material and individually create something interested on his end, but even he proves no match for the inevitable trappings of the movie itself.

Also...I've been damn tired of Jason Isaacs in the sinister villain role for some time now.