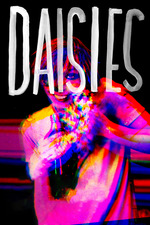 Psychedelic sisterhood in the Eastern Bloc "like a message from another world," just about the most ticklish barrage of nihilism in cinema. To out-spoil the spoiled world, Marie I (Jitka Cerhová) and Marie II (Ivana Karbanová) reject the masculine grinding of war and set out to bombard society with their caprices, a fizzier form of demolition. As blissfully selfish and impudent as children, they turn society into their private set of trampolines, gorging on food and magazine cutouts and Carrollesque wordplay. Patriarchy is a stew of befuddled sugar daddies, driven to tears in pricey restaurants and packed off in trains. (The camera is mounted on the swerving locomotive for a full minute of Len Lye iridescence.) Emerald-green apples and bathtubs overflowing with milk, Nabokov butterflies filmed à la Brakhage and plastered over the pixies' naughty bits, the dumbwaiter ride to Eden and the pastry fight that brings down the chandelier. "Can't you smell how volatile life is?" The blur of Brecht and Sennett is concurrent with hellzapoppin' larks (The Running Jumping and Standing Still Film, Hallelujah the Hills, Zazie dans le Métro), yet Vera Chytilová's revue outdoes them by pushing slapstick fragmentation toward an exhaustive dismantling of norms both social and cinematic. Reality from shot to shot is whatever the heroines make it—their apartment is wallpapered with snapshots of their conquests one moment and gleefully set ablaze the next, the "cuts" of disjunctive editing at one point literally scissor the Maries into floating paper dolls. "We can try anything once," a credo uttered by the destructive-liberating protagonists as well as by the filmmaker contemplating them with delight and horror. The posies of anarchy, their blooming and wilting, a picture of fury and enchantment. The "trampled lettuce patch" of Czech censorship was not amused, though Rivette (Celine and Julie Go Boating) and Campion (Sweetie) certainly were.