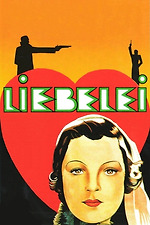 The dancing camera, the active eye, Max Ophüls’ complicit gaze: It begins in between acts at the opera house (Seraglio is heard), a glimpse from a hole in the curtains establishes the Viennese aristocracy in their seats, a reflection of the movie audience eager for drama and music. The Emperor arrives, but the focus is on the first brush between the young lieutenant (Wolfgang Liebeneiner) and the working-class soubrette (Magda Schneider). He's guilty of having "too much luck with women" and she's so shy that her voice wavers during her Brahms recital; they pledge eternal romance while sledding through the snowy woods, poignantly unaware that evanescence is already the director’s recurring theme. At the café, the two lovers swoon to the waltz tinkling out of a coin-operated Victrola, and it’s heaven; at the lavish mansion, a full orchestra swells as the officer dances with the Baroness (Olga Tschechowa) he’s no longer interested in, and it’s just a mechanical pirouette. A second couple (Carl Esmond, Luise Ullrich) completes the Mozartian quadrille, the intruding figure is the Baron (Gustaf Gründgens), who, upon discovery of his wife’s indiscretions with the lieutenant, glares through his monocle, exhales cigarette smoke like a dragon, and chooses pistols at dawn. Militarist strictures and emotional impulses are the contrasting poles of this masterpiece, laid out in Arthur Schnitzler’s original scenario and given the pianissimo Ophüls treatment, caressing tracking shots that are actually outlines of the characters’ many social, class, gender cages. The philandering officer stepping out of the theater mid-performance is a joke admired by Lubitsch in To Be or Not to Be, Bergman adumbrates the gentlemanly-cloddish duel in Smiles of a Summer Night. "The political situation" is playfully alluded to, but this was crafted in 1933 Germany, dangerous ground in which to critique honor codes and have someone declare that "every shot not fired in self-defense is murder!" (Goebbels released it only after erasing the names of the Jewish authors, though Ophüls would have the last word with The Earrings of Madame de...)

A Lizard in a Woman's Skin