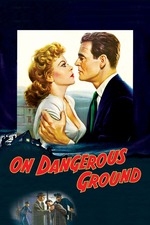 Noir crime and silent-era melodrama, an anguished symphony in two movements. Rain-slick asphalt merging with the nocturnal sky, desolate flats and saloons and back alleys, Scorsese’s feverish city decades in advance. Eleven years on the police force for the clenched protagonist (Robert Ryan) out on patrol every night, "kind of a lonely life." His partners have loved ones to come home to, his encounters are with the "crooks, murderers, winos, stoolies, dames" who bring out his savagery: "Why do you make me do it?" he asks, suspended between a snarl and a sob, before pummeling a twitchy suspect. The violence gets him banished upstate, where a murder investigation leads him to grace personified, the sightless woman (Ida Lupino) surrounded by endless snow. "In my job, it gets so you don’t trust anyone." "I have to trust everyone." An exalted modulation from harsh to lyrical and back, the culmination of Nicholas Ray’s Borzagean side, brimming with angular rhymes and echoes. The blanched expanses of the wintry countryside promise purification and yet they’re as much of a void as the clammy urban labyrinth; POV tracking shots through windshields guide the cop in the city, on the frozen road following a spill he’s an out-of-focus camera helplessly turned on its side. Ryan away from his territory is surrounded by doppelgangers, he’s the boy (Summer Williams) whose sculpting hand has picked up a switchblade and he’s the victim’s father (Ward Bond) wielding a vengeful shotgun. The demure waif herself first materializes like a shadow of the frowzy moll (Cleo Moore) back home, a gnarled, petrified tree branch stands in the middle of her cabin as if sprouting from the floorboards. (Lupino runs her fingertips over a mirror and pauses to fix a lock of hair before her own anxious reflection, ten seconds or so worthy of Buñuel.) Illumination for the blind and serenity for the beast in Ray’s most transcendental work, a composition of disconcerting purity.

A Woman Is a Woman