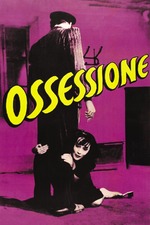 James M. Cain in the Po Valley, a poet's transmutazione. The camera follows the strapping drifter from the back of a truck into the roadside tavern, then dollies in for a close-up of Massimo Girotti, thus Luchino Visconti's Neo-Realism out of a Hollywood movie-star intro. The innkeeper (Juan de Landa) is a former Bersagliere turned rotund petit-bourgeois, his wife (Clara Calamai) dangles her slippers while watching the sexy stranger in the kitchen, poking his fingers in the grease. "What's a little heat to you?" This all benefits greatly from Renoir's influence, open-air lenses taking in a bocce ball match with lumpy locals or a chummy padre astride a bicycle with a belt of bullets strapped across his cassock, culminating in Girotti and the traveling artist (Elio Marcuzzo) tramping like Gabin and Dalio in Grand Illusion. (They share a honeymoon bed in the most evocative shot, the leading man's bare shoulder illuminated by a flickering match and the same yearning gaze later explored in Death in Venice and Conversation Piece.) When the protagonists are reunited, Visconti's operatic side takes over: A raucous portside carnival gives way to competing arias at an amateur contest, a circular panning shot introduces a smoky café roughly the size of a skating rink. The husband's murder is cogently imagined as the distance between headlights disappearing into the darkness and the overturned vehicle on a winding ditch, from there it's a clammy chiaroscuro of guilt and suspicion for the couple. "Keeping guard on a dead man's house" is just the beginning of their penance, their penultimate instant is not a dip into the ocean but a desperate embrace amid muddy flatlands—The Postman Always Rings Twice's hardboiled appetites brushing against European anguish. Antonioni assumes the fatalistic mantle with Cronaca di un Amore, Girotti and all.