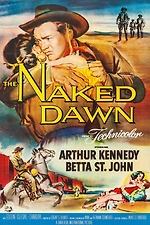 Edgar G. Ulmer on the range in Technicolor is a sight to see, his Faustian interloper wears an affable grin under a mass of stubble and a straw sombrero. From railroad robbery to Vera Cruz heaven, the path of the former revolutionary turned bandit (Arthur Kennedy), a wandering spirit who takes a break and changes the lives of the young farming couple. The aspiring rancher (Eugene Iglesias) has hacienda dreams, his wife (Betta St. John) was an ill-treated servant purchased along with the land—both are beguiled by the stranger "more at home with the coyotes," a sort of Shane scrupulously transmuted to canto Indio form. Long takes are often punctuated with camera movement to accommodate the perspectives and moods of the characters, hence the proto-Leone formulation in the perfidious gringo’s office (loot, revolver, noose) giving way to a marvelously peculiar cantina celebration that grows increasingly Germanic the more it strives for Mexican color. "Ah, your ideas on sin are changing!" Two nights and two days and a dozen shifts of feeling for the trio: Thieves briefly become priests, heroes and villains trade places until they’re just people, concepts like Home and Freedom and Youth and Desire are etched straight into each rich texture. (There are handmade tortillas and machine-tooled tortillas, says the visitor to the wife, and Ulmer le maudit can only smile at the flirtatious filmmaking metaphor.) The outlaw’s eulogy and the flight of "the young bird with its wings clipped," practically Rimbaud’s pipe dream about the Prince and the Genie (cp. Hellman's China 9, Liberty 37). Just the kind of expansive and abstruse Western best appreciated by Gallic cineastes, and sure enough there’s Truffaut avouching an alliance with the triangulations of Jules and Jim.