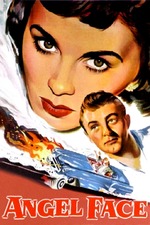 One of the darker gems of film noir from the tenure of Howard Hughes at RKO. Otto Preminger directs with precision & economy this tale of a laconic chump Frank--Robert Mitchum at his cool peak--who gets wrapped up in the manipulations & psychosis of Jean Simmons' femme fatale heiress Diane.
They meet because he's an ambulance driver, sent to her stepmother's mansion when the stepmother "accidentally" leaves the gas on in her closed bedroom. He ignores the stepmother's claims that someone is trying to kill her, and doesn't hesitate to sweep in decisively and slap Diane as she has a fit of hysteria.
Class is the Big Dichotomy here, as Diane, beautiful, rich, manipulative & calculating, is juxtaposed against the traditional good girl Mary, played with charm & world-weary intelligence by Mona Freeman. Everybody but Frank can tell that Diane is Bad News--but several interesting things happen in the course of the film, and under Preminger's steady direction morality becomes increasingly complicated--there aren't really any traditional Black & White Good Guys here--only corruption & false narratives, cynicism & nihilism, and no escape for our anti-hero, who seems resigned to his fate, whether it's to go to the gas chamber for murders he didn't commit; or a lifetime on the run with Diane, and who apparently doesn't see a distinction between the two choices. In the end, it isn't calculation--but psychosis & jealousy which drive Diane--her sudden decision at the film's bleak finale to send them both careening off a cliff--feels both unfortunately inevitable and a spur of the moment decision. Preminger's thesis: there is no escape, no choice that Frank could make, that wouldn't result in his destruction. Brutally engrossing, and strangely relevant to today's climate of "alternative facts".