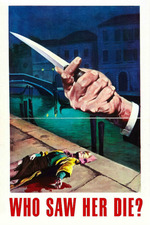 Who Saw Her Die?

Even children succumb to the horrid black magic allghost. And even the supremest spirit sends commands over the body. And sends the Holy Knife as His agent on earth.

Venice shot bathed in heavenly fog, where ethereal portals open to Erebus and opens flaming portals to Phlegethon. The crossing of planes, maybe the fog is the peeking of Tartarus through the rifts.

Even Franco's sculptures look like unconscious manifestations the dead. I'm starting to wonder if Aldo Lado could see a way out of it all. If Short Night of the Glass Dolls is a premonition of apocalypse, this looks back, on the brink, and sees demons eating children. Storms of grief.

And if, Jean Sorel's were eyes wide in terror, here one's eyes are flooded with tears. The Morricone choirs sing like the unquiet dead, in gentle requiem or furious warning, with that propulsive thump pushing forward to inevitable crisis and incorporeal beckoning to the Other Side.

I want to read more hopefully, but I keep seeing these tokens of doom in Lado's films. If there are gleams of spirit here, any hints of salvation, they are buried and lost in the pale fog. Aldo Lado (with his trickster anagrams) makes Doom films.

Begs to be seen in a double bill with Don't Look Now to fully conjure Venice as truest hell, full of ghosts. Perhaps as raw mental wound, to bleed out wilder nightmares. Some desperate act of cinema to summon aid from the dreamworld.

I see some shadowed procession. I must go with them. And be caught in the flood of souls. Seeking the keys of rebirth in crumbling earthly ruins.

All the Colors of the Dark