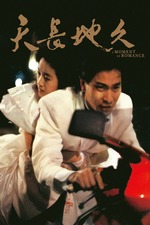 Benny Chan first film, produced by Johnnie To who has long claimed he ghost-direct it like he did some of his early Milkyway films. Benny Chan went on to have a much better solo career than Patrick Yau, as a very solid action director, from 1996’s Big Bullet to last year’s The White Storm, but this certainly is stronger than his better work, but also stands out over anything To had done till them (and arguably until the late 90’s). I’d argue A Moment of Romance is a very central film to explain the appeal Hong Kong Cinema had to a Western cinephile in the 90’s, it has a genuine unusual mix of very straight forward rich girl, poor boy romance with raw violence moving between extremes with nakedness that was alien to genre cinema of the time. Andy Lau is the righteous young triad who is escaping from a robbery uses rich girl Wu Chien Lien as a shield and from that it is love at first sight (only 1990 Hong Kong Cinema could had come up with this meet cute and effectly sell it as the most romantic thing…). Cut to a lot of male buster between triads that want the witness gone, tons of romantic slow mo and ballad montages, male bonding between Lau and Ng Man Tat, Lau looking great while driving a motorcycle (so iconic To build a whole subplot in 2000 Needing You referencing to it), references to Wong Kar Wai’s inferior early Andy Lau triad romance As Tears Go By, Wu wide eyes as she naïvely gazes at Lau, and some great feel for HK streets that adds an element of reality to its teenage girl crush narrative, this film is as shameless manipulative as it effective. A Moment of Romance has the sustained perfection of a great pop song, like the young love it depicts, it burns raw and fresh and is consumed in less than 90 minutes leaving just a young woman walking alone in the street in a dirty wedding dress looking devastated.