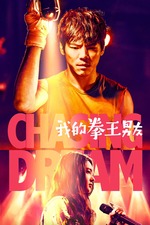 Chasing Dream is a musical melodrama that exists in a mix of artifice and heartfelt emotion that can only be fully expressed through masochism. This is the most Wai Ka-fai movie Johnnie To directed this decade, its world is self-aware and false from top to bottom, a televisual pop dreamscape of popularity above all else and personal sacrifice whose non-mediated personal moments are rare. To directs everything like it is a big musical, a series of careful choreographed duets that plays like a reversal of Office's theatrical staging. The last four To films are all very different deliberate tales of entrapment, people lost in their own societal tnnel vision whose ups depends on To's occasional benevolent God's pov. I doubt Chasing Dream is gonna get much western play as it is the most Chinese-focused film he has ever done, Wai's satire is far too broad for smart cinephile sensibilities and the material pure melodrama, but if one enjoys dramatic conviction rendered through a series of careful staged emotional numbers (be them reality tv showdowns, MMA pit fights, or one on one conversations), there is a lot to love about Chasing Dream.